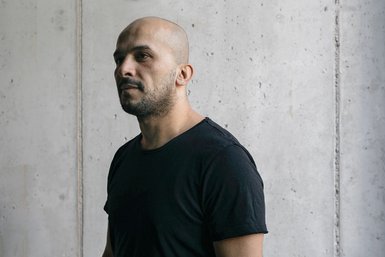 Khaled Barakeh is a Berlin-based conceptual artist and cultural activist. He graduated from the Faculty of Fine Arts in Damascus, Syria in 2005, completed his MFA at Funen Art Academy in Odense, and a Meisterschuler study at the Städelschule Art Academy in Frankfurt. Driven by his observations of longstanding social injustice, Barakeh approaches creative practice as a tool for societal change; manipulating commonplace visual and cultural touchstones to expose and undermine stagnant power structures. In a recent major shift in his work, he has developed a suite of social initiatives that leverage artistic thinking to directly address the issues of contemporary mass migrations. Chief among these projects are the online platform SYRIA Cultural Index, the mobile Syrian Biennale, and the non-profit Coculture e.V. Barakeh has exhibited at Künstlerhaus Stuttgart, The 11th Shanghai Biennale, The Frankfurter Kunstverein, The Busan Biennale, and Museum of Arts and Crafts Hamburg, among many others.

Forms of modern life may differ in quite a few respects – but what unites them all is precisely their fragility, temporariness, vulnerability and inclination to constant change. To ‘be modern’ means to modernize – compulsively, obsessively; not so much just ‘to be’, let alone to keep its identity intact, but forever ‘becoming’, avoiding completion, staying under defined. (…) ‘Liquid modernity’ is the growing conviction that change is the only permanence, and uncertainty the only certainty.

On the Ropes underscores a significant moment of permeability between the experience of the immigrant, the artist, and the general citizen of contemporaneity. As humanity progresses deeper into Bauman’s “Liquid Modernity”, the circumstances of the displaced and the circumstances of the economically and ideologically marginalized cultural producer become more indistinguishable from universal circumstances. Augmenting a reality rife with anxiety and instability, Barakeh suspended every object in his studio-cum-apartment 15 centimeters above the floor on monofilament wire. In a concert entitled Sounds Like Precarity, musicians were invited to improvise, compose and play a piece on the wires. An ongoing work that has been shown in Frankfurt, Berlin and Paris to date, each new iteration is a reenactment of the original studio apartment that is staged, filmed and incorporated into subsequent installations and videos.