“The academy would like to acknowledge that tonight we have gathered on the ancestral lands of the Tongva, the Tataviam, and the Chumash. We acknowledge them as the first peoples of this land on which the motion pictures community lives and works.” These words from award winning scriptwriter Taika Waititi at the 2020 Oscars acknowledged that the Academy of Motion Picture Arts and Sciences from Hollywood, the world’s premier cinema of representations, stands on lands which, in times past, belonged to someone else. The words made history in acknowledging a conflict that lies at the core of the creation of the United States after the massacre of Native American populations and the conquest of their lands.

Earlier, accepting his own award for best adapted screenplay, Taika Waititi, born of a Maori father and a mother of European descent, dedicated his Oscar “to all the indigenous kids in the world who want to do art and dance and write stories. We are the original storytellers and we can make it here, as well.”

How does art address issues of conflict in a global age? The latter connotes the shrinking of distances, and the production and circulation of art through globally dispersed spaces, be they museums or mural walls. In this issue of Arts & International Affairs, the conflicts detailed range from traditional to current concerns: bordered lands and peoples (David Toohey and Fabiana Kent Paiva), migration and refugees (Eliza Garnsey), the issue of power in curating military heritage (Chrisine Sylvester and Panos Kompatsiaris), and tensions arising from the bureaucratization and political economy of cultural policy making (Karsten Xuereb).

Until quite recently, dominant art value chains worked through a variety of exclusions—that of peoples, ideas, forms, colors, and aesthetics among other things. The arts reflected, represented, and shaped conflicts, either through their opposition to being excluded or, at times, in congruence or complicity for their inclusion. Peter Weibel (2013) writes the project of European modernity that created nation-states and their political economies also worked itself through the hierarchies of art. These hierarchies are now coming undone in Europe: “Now for the first time they find themselves in the situation—or at least potentially in a situation—where other states determine who is included and excluded” (p. 20). As to the circulation of these new inclusions and exclusions, the vastly different and media-rich spaces of the twenty-first century are quite different from the walls of European palaces or the privileged museum spaces where art used to be displayed. To cite an example of new difference, the glorification of conquest and military history was and, to some extent, remains a European arts project. However, in a multimodal essay in this issue, Panos Kompatsiaris and Christine Sylvester engage on the question of who has the authority to memorialize war. Sylvester writes that “multiple sites of curatorial display can curate or re-curate common but incomplete understandings of a war and its constituent parts.” The AIA multimodal essay analyzes the content of Sylvester’s new book Curating and Re-Curating the American Wars in Vietnam and Iraq (Oxford 2019).

As modernity gives way to globalized spaces, the role of art is open to question again. A recent report titled Art and Conflict from the Arts and Humanities Research Council in the United Kingdom warns that art cannot be instrumentalized to provide solutions or a privileged perspective on the conflict. Michaela Crimmin (2014) notes in her introduction to the AHRC volume that art plays multiple roles in conflict— among other things, representing, resisting, reflecting, role-playing, provoking and observing. “What is absolutely definite is that art continuously stimulates new debates and fresh reflection, and this is as true of art produced by Goya as it is by some of the art school students of today” (p. 11).

To understand the multiple roles for art, one must imagine a world without art. This need not mean the physical absence of art but the absence of the positionality of art in global processes of conflict of various sorts. This would be a world without the contemplation of the war from Picasso’s 1937 Guernica or the articulation of a revolution from Freedom Songs in apartheid South Africa. Freedom Songs did not end apartheid either but they galvanized the collective action that brought apartheid to its close. Neither did Guernica end the idea of war but called attention to its horrors. Picasso refused on several occasions to explain the symbolism in his painting. The cry on the right and the horror of the war are reminiscent of Francisco de Goya’s Third of May painted in 1808. From Goya to the time Picasso paints Guernica, questions of heroic art or notion of power and glory in painting began to be laid to rest.

Art can reinterpret conflict. Questioning oppressive state instruments, Eliza Garnsey writes in this issue: “In the absence of state protection, artistic representation becomes an important intervention into the practices and narratives surrounding Australia’s treatment of refugees and asylum seekers.” Similarly, addressing issues of protest, racism, and art in the context of United States-Mexico border David Toohey writes: “Art about the border fights racism in a few different ways. It sometimes directly depicts racist incidents at the border. It may also refer to land loss, which is an assault on communities of Mexican ancestry.”

Both David Toohey and Karsten Xuereb in this volume call attention to the underlying political economies of accumulation and subsequent cultural production in addressing conflict. David Toohey foregrounds issues of “primitive accumulation” that underlie current assertions of border and sovereignty. Karsten Xuereb looks to the future in his critical analysis of the European Commission’s A New Agenda for Culture. While the Commission tries to further inclusivity and diversity in cultural expressions, Xuereb finds that the economic priorities and “self-satisfying bureaucratic merit and achievement” are counterproductive to the project of European cohesion and integration.

Both essays may be read as part of an on-going debate about the deeper structures in art. David Toohey invokes Deleuze in his reasoning, specifically the theory of the time image which allows him to show how borders obscure the reality of how safe and dangerous zones were created. These underlying political economies are also emphasized in Hardt and Negri’s 2001 book Empire. Writing about the global turn in art, Aruna D’Souza (2014) notes that the global is economic. This “economic” global also forms the crux of Xuereb’s essay. My own views on global arts remain cognizant of both enslaving and redemptive and redemptive possibilities but some underlying force of the economic is undeniable (Singh 2011, 2017).

There are two further issues that are central to our consideration of art and conflict. In describing these issues, I borrow from filmmaker Hito Styerl’s 2007 essay “The Articulation of Protest.” Steyrl notes that this articulation must be understood at two levels: that of the “verbalization or vocalization of political protest” and “the structure and internal organization of protest movements” (p. 332). The essays in this volume call attention to both issues through their discussion of the aesthetics of circulation and through the peoples, organizations, and institutions that are involved in this circulation which involve new spaces and multimodal technologies. Taken together the articulation and circulation are precisely what makes arts global. They undo and question the singular axis of modernity and its attendant aesthetics.

The role of art in providing multiple perspectives cannot be overstated. The undoing of modernity does not entail fixity of another—although reactionary and populist politics around the world aspire for just such a point of view—but the multiplicity of the offering and the increasing agency of interpretation. Of course, this also runs counter to Hardt and Negri’s position in Empire. Nevertheless, Egyptian artist Wael Shawky’s Song of Roland is illustrative of just such a non-fixity. The Song of Roland was originally in French and glorified the Crusades to inspire the soldiers in the middle ages to fight the Muslims in Spain. Wael Shawky translates the song into traditional Arabic and it is then performed to fidjeri style used among the pearl divers of the Middle-Eastern Gulf region. The cultural critic Adel Abdel Wahab (2018) writes astutely on the new perspective:

“Shawky may have reproduced the original song without alteration, yet he has modified its context, employing Gulf voices as audio containers that do not intervene with any trace of emotion: They are simply human trumpets. Shawky reminds contemporary, cultured Europe—a Europe that has apologized for the Crusades—of its history of war in the dark middle Ages. Here, the Muslim enemy sings a historical song of Christian pride, the content of which is directed against him.”

The questioning of European modernity has also led to the questioning of multiple hegemonies in other times and spaces: the ubiquity of patriarchal practices, caste in India, political oppression in China, or slavery in the Americas. The global in art and conflict is a bit unmoored from a dominant ontology. But the temptation to bring it back to one is ever present. As history continues to repeat itself, it’s hard to imagine a world without art – or one without conflict. 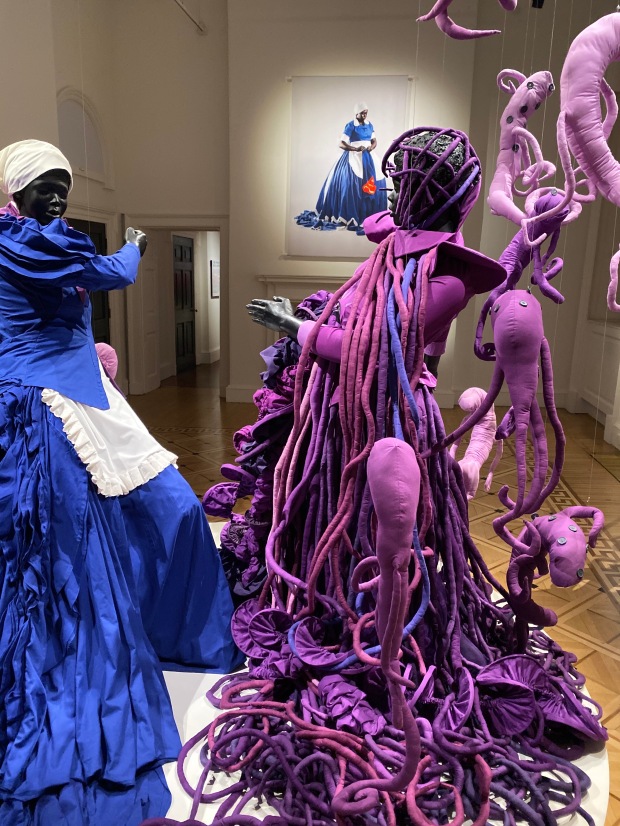 Steyrel, Hito. (2007) The Articulation of Protest. In Art and Social Change: A Critical Reader, eds. Will Bradley and Charles Esche, 332–339. London: Tate Publishing.

Wahab, Adel Abdel. (2018) A song of the Crusades in the voice of the Gulf: On Wael Shawky’s latest performance. Translated by Assma Naguib. Mada Masr. <https://madamasr.com/en/2018/01/13/feature/culture/a-song-of-the-crusades-in-the-voice-of-the-gulf-on-wael-shawkys-latest-performance/&gt;