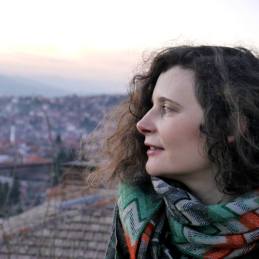 Joanna Zielińska graduated in Theater Studies and Philosophy. She is presently finishing her Ph.D. thesis entitled “Heterotopy Sarajevo. Urban Space as a Stage and Representation,” at the Department of Performance Studies at Jagiellonian University, Kraków, Poland. Since 2011, her academic and artistic research has focused on the Balkans and specifically on Bosnia and Herzegovina where Joanna conducted many research projects. To date, she has worked in cooperation with Tanzelarija and Sarajevo War Theater, where she produced the interdisciplinary project Sarajevo Mind Map. In 2016, she debuted as a filmmaker with her documentary Sarajevo Femme Fatale. Recently, Joanna was a researcher at the Faculty of Dramatic Arts, at the University of Arts, Belgrade, Serbia. Her research interests include contemporary theater in the Balkans, the reformulation of political narratives around national identities after the breakup of Yugoslavia and its representations in public space and arts, and the performativity of urban space.

Sarajevo is a fascinating city, founded by Ottoman’s in the fifteenth century, it developed into a multireligious and multiethnic center of the Balkans. Often, it is compared to the bridge between East and West. Unfortunately, its cosmopolitan character, based on coexistence and dialogue, deteriorated during the wars in former Yugoslavia during which the city was besieged between 1992 and 1995. Sarajevo, in the past the European Jerusalem, the symbol of multiculturality and co-existence, due to the conflict became a symbol of inter-religious animosities and urbicide. The city, which once was the heart of prosperous Yugoslavia, the host of Winter Olympics in 1984, today suffers from economic, political, and cultural decay. The signs of war trauma are still visible in the material dimension of Sarajevo as well as the inhabitants’ memories. As a Ph.D. researcher, I am interested in tracking the changes in urban representations of Sarajevo after 1995. My fieldwork conducted in the Bosnian capital, as well as the experience of living in the city, enabled me to get to know Sarajevians and to listen to their very personal stories, often associated with specific places. It triggered the idea of “mind-mapping” the city and later conveying Sarajevians’ experience through different art mediums, among them documentary film. This way the movie Sarajevo Femme Fatale was created in 2015, as a result of months of research and the outcome of Sarajevo Mind Map project.[1]

Sarajevo Femme Fatale is a documentary film reflecting on Sarajevo’s past, present, and future, seen from the perspective of six women aged from 18 to 65. Their stories become a deeper reflection on the city’s condition. The documentary is the outgrowth of the Sarajevo Mind Map (2015) project that aimed to present the Bosnian capital through the lenses of its citizens’ experience and practice. In cooperation with a group of international artists (dancers, theatre artists, choreographers, filmmakers, audio-visual artists, photographers), I decided to depict the city using different art mediums. The starting point for urban research was Henri Lefebvre’s theory of the production of space (1991), according to which social space is a dynamic set of relationships and forms. Lefebvre visualized his thought in the interrelated trialectic model of space that consists of: perceived space (spatial practices), conceived space (representations of space), and lived space (representational space). Perceived space is related to the tangible dimension of space, these are the markets, streets, buildings that one experiences in everyday life. As such, a perceived space is a substratum for two other dimensions: conceived space and lived space. Conceived space is the conceptualized space of planners, scientists, architects, technocrats, and social engineers. It consists of structured and abstract representations of space such as maps, signs, theories, ideology, and plans. I perceive it as an institutional space, that is managed by the state apparatus. On the other hand, Lefebvre signalizes the existence of lived space which is another layer of abstract space evinces through a system of symbols and signs produced and lived by the everyday users and inhabitants of the city, but also artists. Thereby, lived space comes out in cultural memories, symbols, images, art. During the project, applying appropriate methodology, I researched the last-mentioned element of Lefebvre’s triad – lived space of Sarajevo. In order to gain an insight into social perception and relationship between Sarajevians and their urban space, together with my colleagues, we organized a set of interviews, and workshops for youth and adults.

The results of the project were among all: a dance-video performance; exhibition (the result of community projects about urban space); four different workshops for children and adults: dance, theater, and film classes, led by professional artists; community-involving performances and documentary film Sarajevo Femme Fatale.

The common portrait of femme fatale presents her as a seductive woman whose charm and glamour are irresistible and entrap the lover, making him blindly in love and eventually leading to often dangerous or risky situations. Helen of Troy, whose beauty sparked the Trojan War, is a classic example of femme fatale in the literature. The motif of femme fatale became especially popular in twentieth-century cinema. Mia Wallance, for example, a female character from Pulp Fiction, is a stereotypical instance of a beautiful, intelligent, and seductive woman of the 1990s, who is fully aware of how to use her assets to control the masculine world.

In my documentary, it is the city that is portrayed as a femme fatale. The inspiration came from interviews with the citizens of Sarajevo. Particularly one story caught my attention. Its author, Amra translated her personal experience of the city into a short story, which she titled Sarajevo Femme Fatale. Her words provoked me to rethink firstly the social representations of urban space. I found out that many of my interviewees relate to Sarajevo as to a person, using the article “she.” As, for example, Indira who refers to Sarajevo using figures of a caring mother, but also a suffering being that needs affection and compassion. Secondly, Amra’s story made me reevaluate my own relationship to the Bosnian capital, that rests on a particular net of attraction and repulsion. Similarly, as in the case of femme fatale, Sarajevo allures me with its seductive charm, but after a while, its hectic and dense energy becomes a burden to me and makes me wish to leave the city. Nevertheless, after a while, I start longing its presence again and eventually I come back to green Milijacka valley beguiled by its intoxicating energy. Sarajevo as femme fatale is sketched in a film with the help of images, music, dance and women’s voices.

In the post-war countries such as Bosnia and Herzegovina, women’s voices are often omitted in the narratives dominated by the masculine experience of the conflict. In contrast, I decided to focus on the female experience of Sarajevo. I selected six Sarajevian women of different ages in order to embody six different generational experiences. The older generation of women, Sejda, Indira, Amra, and Natasa have vivid memories of the time when Bosnia and Herzegovina was a part of Yugoslavia. As a result, they often refer in their narratives to the period when Sarajevo was multicultural, when different ethnic groups peacefully coexisted with each other. The childhood memories of my other interviewee, Tihana, are closely related to the images of the war and siege of the city, whereas Sara, the youngest one, represents the post-war generation of Sarajevians, who, even though have not experienced the war directly, is greatly influenced by its aftermath. They have to face an economic and political crisis that has an impact on cultural life and education. Therefore, the section of the movie with Sara starts with the image of the National Museum of Bosnia and Herzegovina, closed for visitors between 2012 and 2015 due to the lack of funding.

To make a film about the relationship between my female characters and Sarajevo complete and multidimensional I decided to use the language of movement. Dance refrains, which divide the narrative between six women, enabled me to reveal emotional side of the connection between them and the city. As my characters often repeat, they would never be able to leave the city, because Sarajevo is much more than just the place they live. They experience it as a part of their lives, their families, their youth and childhood. Without Sarajevo they feel incomplete.

The War in the Movie

Taking up the subject of representations of Sarajevo, inevitably the topic of the war comes out. In the movie, the shadow of the siege recurs in images of the war-related places that I insert in a film. One of them is a fruit and vegetable market in the center of Sarajevo—Markale. During the war, two separate bombardments that happened there caused big massacres, the first one occurring in 1994 and the second in 1995. Therefore, even though Markale today again serves its original purpose, it embodies the sign of lived trauma in the form of a red wall with the names of the victims at the back of the market. The stigma of the war is also visible on the walls of Sarajevo’s buildings that carry bullet groove impressions, and on the streets marked with Sarajevo Roses.[2] These injured spaces are confronted by perfect, glassed constructions of shopping malls erected after the war in order to heal the city’s wounds. But are they constructed according to the needs and dreams of Sarajevians and to restore the spirit of the city?

Sarajevo femme fatale is a romantic ballad about the lost city, in which past, present and future are embedded in memories, symbols, visions and plans cherished by its inhabitants. The film was presented at festivals in Sarajevo (BiH), Tirana (Albania), Rivne (Ukraine), Edinburgh (Scotland), and Bialystok (Poland).

[2] The holes in the concrete, created by the explosions, and filled with red resin after the war finished.