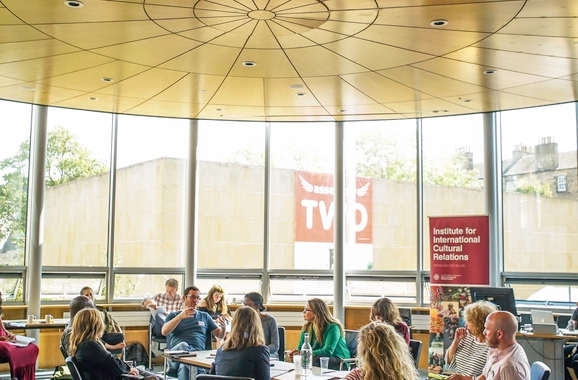 The performative repertoire of the arts is comprised of cues, symbols, rituals, ceremonies, presentations and narratives—not unlike that of cultures themselves. Goffman (1959) notes that these dramaturgical cues are inherent in any society, readily understood and re-enacted habitually by the participants.

The cultural politics of the arts are, arguably, inherently performative and participatory. Performativity is when the act of communication imparts social meaning (Butler 1993). Participation in the arts can vary from attending a performance to puzzling and providing public reasons to other participants for one’s position. Participation can include manipulation, contestation and problem-solving (Elster 1998; Singh and Flyverbom 2016).

Interacting cultures produce tremendous anxieties and disruptions in narratives: a clash of symbols and rituals, if not civilizations. As embodiments and representations of cultures, the arts can have tremendous power, with both positive and negative implications, to make the participants reflect on the cues that make up a societal or dramatic performativity across cultural interactions.

This issue takes up two broad global themes related to performativity and participation. The first distinguishes a dramatic performance from the politics that it enacts. Performance here implies the theatrical enactment of performativity, often from a presentation space.

The second examines the value and interactions that make up our cultural politics.

The performativity of political actors and the limits of their theatricality undergird our first theme. Miia Huttunen’s essay on UNESCO presents the organization as a possible vision for an international society wherein not all the actors conform to the organization’s script for peace. Despite the political fissures, she presents the 1959 film catalogue the Orient from UNESCO, prepared in cooperation with the British Film Institute, as a way to understand and interact across cultures with possibilities for peace. The shared motivation for peace lies in the performativity for peace in the catalogue: “The catalogue is clearly a call to arms, aiming to unite the peoples of the world in a battle against ignorance, prejudice and misinformation—all of them worthy opponents to attack, although slightly more abstract than a concrete, physical enemy.”

In contrast, Olga Taxidou takes a step back in examining the “hypocrisy” of actors who perform our politics. She returns to hupocrites, or the actors who were different from or under (hupo) the chorus (krinein). Taxidou notes that “classical Greek acting was not about pretending to be something one was not, it was about performing that role, enacting it, demonstrating it through very specific conventions like masks.” The most democratic politician would be an hupocrites who does not conflate acting with being. But she leaves us thinking of our current politics where populist actors may not respect the distance between theatricality and democratic politics.

The second theme in our issue analyzes the values embodied in art and the way they circulate through art and representations. The “Multimodal” essay in this issue reports on an exercise in Participatory Action Research (PAR) that deliberated global cultural values and interests through the vehicle of the Edinburgh festivals. Unlike the Enlightenment belief that arts festivals will bind society together, the deliberations report on the thoughtful discussions that arts can engender and the barriers broken to address taboo topics. Guy Gotto’s brilliant films on the deliberations provide almost an ethnographic look at these discussions covering the thirty-three fellows from around the world who convened through the Institute for International Cultural Relations at the University of Edinburgh during 2017–18.

Jooyoun Lee’s essay on the K-pop band “Twice” further develops the theme that, rather than arts bringing people together in conversation, they can equally reflect current cultural conflicts. The author examines the “Tzuyu Incident” that involved the band’s Taiwanese member whose identification as Chinese irked nationalistic sentiments in mainland China. Rather than the vision of an international society conjured up in Miia Huttunen’s essay, the Tzuyu Incident reminds us how nationalistic borders are reinforced through arts controversies.

Stuart MacDonald provides a philosophical reflection on the incompatibilities between values and cultures. He evokes an essay from Thomas J. Moore on Wittgenstein to argue that, despite cultural relativism and differences, there are many reasons to expect cultural relations to increase through a “layered pluralism” based on moral obligations, institutional constraints, and self-interest.

There are also ways that the two themes intersect with each other. Of the two empirical “Longform” peer-reviewed essays—one on UNESCO provides the outlines of a possible peace, and the other on a Korean pop band shows a contrasting view of how culture reflects current forms of (nationalistic) conflict. The two political philosophy essays in this volume provide deeper, abstract reflections. Olga Taxidou points out the limits of theatricality and the dangers of confusing theatricality with democratic leadership. Stuart MacDonald outlines the possibilities of cultural relations in a world full of conflicting cultures. Finally, the films featured in our “Multimodal” essay report on a Participatory Action Research (PAR) exercise at the University of Edinburgh that brought thirty-three cultural leaders from around the world. PAR techniques produce knowledge through participant deliberations and praxis. The deliberations reported here are important for understanding the performative meanings of cultural representations. Contrary to the idealistic, perhaps even a marketing-oriented, view that the Edinburgh festivals bring the world together, the deliberations featured in these films attest to the follies and rewards of such Enlightenment thinking—nevertheless as critical perspectives themselves.

The arts, as noted earlier, possess enormous representational capacities to make us reflect on our actions and situations. The 2017 adaptation of Ionescu’s Rhinoceros at the Edinburgh International Festival with playwright and director Zinnie Harris recalls ideas of groupthink against which Ionescu’s autobiographical character Berenger rebels (Quinney 2018). As he shouts “I’m the last man left. I’m staying that way until the end. I’m not capitulating” at the end of the play, we are reminded of the tremendous power of theatricality in our political world to entrap us. Political theorist Mihaela Mihai (2019) notes that the refusenik stands outside this groupthink. To avoid entrapment, reflective judgment is necessary: “Reflective judgment refers to the individual’s capacity to judge particulars as particulars, and not by subsumption to a principle, rule, formula, etc.” (Mihai 2016:24).

Thespis was the first person in Western culture to step outside a chorus to assume the mask of another character whom he enacted. Performativity and participation in this issue are only meaningful to the extent that our cultural politics makes us aware of the masks our actors wear. Somewhat like Guy Debord (1967), invoked directly in the Taxidou essay, the authors in this issue distinguish societies and actors from their spectacles. The spectacle “is the sun that never sets over the empire of modern passivity”, warned Debord. The first step toward a critical understanding of performativity is active participation and reflective judgment.

Butler, Judith. (1993) Bodies that Matter: On the Discursive Limits of Sex. London: Routledge.

Goffman, Irving. (1959) The Presentation of Self in Everyday Life. New York: Anchor Books.