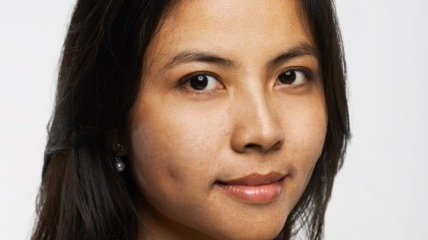 Chankethya “Kethya” Chey was born in Phnom Penh, Cambodia. The daughter of political figures, Kethya dreamt of being an ambassador or prime minister, but not a dancer. She began to study classical dance at the age of five, and was part of a tour to Europe at the age of nine. Since then she has never stopped dancing, and has performed with the Cambodia Royal Ballet Troupe touring Europe and Asia. She received a bachelor’s degree in the Faculty of Choreographic Arts from the Royal University of Fine Arts in Phnom Penh, and a bachelor’s degree in English from the Royal University of Phnom Penh. After thirteen years of dancing and creating pieces that engage both personal and political history, she encountered contemporary dance for the first time by participating in a Southeast Asian dance project called “Realizing Rama.” The experience changed her life. She was intrigued by the freedom, the freshness, and the creativity that arose out of the new dance style. This inspired her to go to UCLA for a three-month choreography and arts management fellowship where she was exposed to different dance forms. She then received a Fulbright scholarship to obtain her MFA at UCLA. She returned to Cambodia in 2014 and became the Artistic Director of Amrita Performing Arts.

The categorization between high and low appears to be the result of social tendencies to value works that speak to the familiar. Finding art accessible or applicable to one’s own condition can increase its perceived value. Consequently, art is assessed by public opinion, not its intrinsic nature.

Art is a reflection of people and their social context. It also unifies differences and brings awareness. Countries around the world create cultural exchange programs through art to develop mutual understanding between different cultures, countries, and people. For this reason, it should not be placed in different levels such as high or low.

For whom is an artwork created? Artists often create for specific audiences, but that does not preclude others from appreciating their works. If the work speaks finds a way to connect, that piece has value. Commercial art does have this ability to connect; it should not be classified as low just because it is not ballet or opera. All artistic creations, regardless of form, have the same potential to communicate with anyone. When the terms high and low are applied, we lose sight of that potential.

Separation in art is equal to separation in society. Art is one of the main means of communication that can connect the world and reflect on cultural, political, and social dynamics. Let art represent people, tradition, culture, freedom, understanding, unity, and harmony.