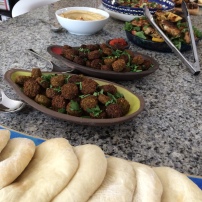 To explore the foods of another country, people or region is one way to visit other parts of the world, to discover different tastes and customs, and perhaps in the search for key ingredients, to meet new people with ties to these lands. Yet embarking on this local form of culinary tourism also involves a reflexive experience where the pursuit for authentic flavors impels us to ask why authenticity matters, and what we assume to be authentic in any case. Moreover, the types of food we serve can say a lot about who we are. For example, to serve “Israeli” food such as hummus at a Synagogue event is a reaffirmation of the Israelization of Diaspora Jewish identity. Yet, within the field of International Relations, to examine the politics of food is rarely if ever done in these ways. This is a shame. Food has a lot to tell us about the world we inhabit.

Two cookbooks on Israeli food help make the case: Yotam Ottolenghi and Sami Tamimi’s Jerusalem (Ottolenghi and Tamimi 2012) and Michael Solomonov’s and Steve Cook’s Zahav (Solomonov and Cook 2015). Both cookbooks are about Israeli food, and both are written (to the extent that any cookbook is written by the names on the cover) by Israelis.

Zahav is the cookbook of an Israeli American whose brother David died in the Israeli army, killed by a trap set by Hezbollah. The cookbook’s introduction explains the background to this tragedy, and the story that the cookbook offers is something of a homage and eulogy to Solomonov’s lost brother: “My brother had died fighting for Israel, and nothing I could do would change that. But for the first time, I began to see cooking as a powerful way to honour David’s memory” (Solomonov and Cook 2015:19). This autobiographical and emotionally charged narrative is deeply powerful as it overshadows all the recipes in the book that follow. Cooking from Zahav can share in honoring the memory of Solomonov’s bother, but Zahav is political in a different way.

The cookbook takes any political sentimentality away from a chauvinistic nationalism because, for Solomonov, the reason to explore Israeli food is to escape from the violence of the region. He writes, “I would expose people to a side of Israel that had nothing to do with politics and didn’t ever make the evening news” (Solomonov and Cook 2015:19). This decision to view food as somehow apolitical is of course deeply misleading, although no doubt genuine. Food is incredibly political (Appadurai 1988; Mintz 1996) and the seeming apolitical character of the book is itself a political choice with political consequences. The politics of this cookbook are about presenting Israel in a positive light as opposed to the negative light of violence, war, occupation, terror, and death. Food can transcend all of it.

Ottolenghi and Tamimi represent the food in their cookbook in a similar yet different way. For them, food can also transcend the politics of the region and contribute toward a peaceful future.Jerusalem (2012) was self-consciously written to overcome the political and cultural violence of the Palestinian-Israeli conflict, with food providing a unifying narrative that could bring these two people together. They write (Ottolenghi and Tamimi 2012:12-13):

Alas, although Jerusalemites have so much in common, food, at the moment, seems to be the only unifying force in this highly fractured place. The dialogue between Jews and Arabs, and often between Jews themselves, is almost non-existent. It is sad to note how little daily interaction there is between communities, with people sticking together in closed homogenous groups. Food, however, seems to break down those boundaries on occasion…. It takes a giant leap of faith, but we are happy to take it—what have we got to lose?—to imagine that hummus will eventually bring Jerusalem together, if nothing else will.

Both cookbooks are political, in different ways, but with a similar conclusion. Through food we can discover something positive and hopeful about Israel that we otherwise would miss.

This voyage of discovery and the dangers that it involves are evident in the ostensibly most Israeli of foods, hummus (both cookbooks, of course, offer a recipe). Hummus has become a major Israeli food, one that can be understood as representing a significant appropriation of Palestinian and Arab food culture, and potentially a classic case of a form of cultural appropriation or cultural theft whereby “Jewish appropriation of certain Arab dishes can be regarded as yet another instance of Israel swallowing Palestinian resources and claiming them as their own” (Hirsch 2011:618).

Trying to define Israeli food is, like most efforts at defining national cuisines, problematic and political (Appadurai 1988; Mintz 1996). It would not be possible to visit a single restaurant where the range of foods from Jerusalem or Zahav is on offer. Both sets of authors acknowledge this point implicitly and explicitly. Solomonov and Cook (2015:21) writes, “You won’t find all of the dishes in this book at a single restaurant in Israel. Together though they make an impression of a cuisine that is evolving….”. Part of the reason why all of the foods in the cookbook cannot be found in a single restaurant in Israel is because of the polyglot character of Israeli food. In a country defined as the Jewish State with a difficult (to put it mildly) relationship with its non-Jewish inhabitants, this diversity of culinary influences and traditions are most regularly experienced through acts of appropriation.

Politically, claiming foods as Israeli served (and serves) the larger political process of legitimating political Zionism. The culinary staple for Jewish tourists to Israel was (perhaps still is) the traditional Arab falafel and hummus (Gvion 2012). All over the country, the usual tourist traps sell postcards featuring pita bread stuffed with falafel and topped with an Israeli flag. The local cactus fruit, the “sabra”, that is actually indigenous to Mexico, is a case in point, as the name of the fruit has come to serve as a metaphor for native-born Israelis: prickly on the outside but sweet on the inside. The sabra fruit, just like hummus, falafel, sabich and knafeh, are not indigenous to Israel, and thus not truly authentic if authenticity is understood as having some kind of statist and nationalist primordial local tie. As such, the only foods that can be indigenous to Israel are the foods of the local Palestinian populations, but this raises all sorts of difficulties for the Zionist narrative of belonging to the land. Indeed, through adopting local foods, Israelis are able to find a way to make them feel as though they belong to the region. Correspondingly, when Diaspora Jews adopt Israeli foods they are finding ways to feel more connected to Israel.

Both Jerusalem and Zahav provide opportunities to achieve this connection. These cookbooks offer the potential to source and search out the foods found in the cookbooks either at home or in Israel. Jerusalem reads like a travelogue insofar as it describes the backgrounds of the foods that could best represent the city. Even more explicit is Solomonov’s invitation: “I hope that you will explore these recipes and, in them, find some of the magic that Steve[2] and I found in Israel. Better yet, go to Israel and see for yourself” (Solomonov and Cook 2015:21).

This invitation to visit is also evident in how both books create an image of a place that is worth searching for. Significantly, Ottolenghi and Tamimi’s book is not published in either Hebrew or Arabic.Jerusalem’s audience lies outside of Israel and the image of Jerusalem that they create can only exist outside of Israel — and they know this. The book presents an inherent contradiction: that the Jerusalem it creates is largely possible only outside of Israel. The sun-soaked land of harmony they represent could not be further from the daily life experiences in Jerusalem. Those who revel in their cookbook, with its glossy images, are no doubt searching, like the book’s authors, for that harmonious Jerusalem. This idealized Israel is also evident in Zahav (which means gold in Hebrew), and is also linked to Jerusalem (not only because of the famous song, “Jerusalem of Gold”) because it was a courtyard in the Old City of Jerusalem that inspired Solomonov and Cook’s restaurant. The paradox that both cookbooks offer is that to experience this Jerusalem — a Jerusalem that many no doubt desire for — is possible only in the Diaspora, such as in Philadelphia, where the restaurant Zahav is based, or at home (assuming you can locate all of the specialist ingredients).

An added touch in both books is how the personal stories of the authors add a kind of authenticity and legitimacy to the Israel that their cookbooks create. Ottolenghi and Tamimi are Jewish and Palestinian, are successful business partners in London, and through their partnership represent exactly what is not possible in Israel because of the conflict. Indeed, their vision of peace through hummus is in so many ways the opposite of the political situation in Jerusalem where attempts to help unify the city can backfire.[3]However, as Jerusalemites they can claim an authority in being able to know what foods are representative. Zahav provides a similar authoritative narrative through the author’s ties to Israel, and in how the book grew out of a desire to connect with Israel and share the diversity of foods that can be experienced there. Both books offer its consumers something authoritative in that they are tied to a place, by people who ought to know that place, and through stories that are grounded in this same place.

These cookbooks provide rich sites in which to explore the ways that we can experience if not discover the politics of another land through the practices of the every day. What does it mean to vicariously explore another country through its food? What images do we get of these lands from cookbooks that try to (re)present traditional or authentic recipes? How do we learn about other cultures from such books, and what do these lessons say about us? These are all questions that an examination of cookbooks can provide. What I have tried to demonstrate here are some of the questions and theoretical issues raised in an analysis of cookbooks as a primary source. These questions that pertain to how we understand authority, authenticity, locality or place, politics, identity, legitimacy, appropriation, and thus violence are all relevant to scholars of IR. That cookbooks are not taken seriously in our field is a symptom of a field more concerned with abstractions than with the every experiences of the international or global (Löwenheim 2010). Yet, for most of us, our most regular experiences of the international may well be what we decide to eat for dinner.

[1] Ilan Zvi Baron is a lecturer in the School of Government and International Affairs at Durham University, where he is also co-director of the Centre for the Study of Jewish Culture, Society and Politics. His most recent book is “Obligation in Exile: the Jewish Diaspora, Israel and Critique” published by Edinburgh University Press. He is also professionally trained in the culinary arts.

[2] Steven Cook is his business partner.

[3] For example, there was hope that the Jerusalem Light Rail that passes through Jewish and Arab neighborhood would help unite the city. However, the Light Rail has been the target of Arab attacks making even this attempt at unifying the city impossible to separate from the Israeli-Palestinian conflict. On the politics of the Jerusalem Light Rail see, Nolte and Yacobi (2015).

Appadurai, A. (1988) How to Make a National Cuisine: Cookbooks in Contemporary India. Comparative Studies in Society and History 30 (1): 3-24.

Hirsch, Dafna. (2011) ‘Hummus Is Best When It Is Fresh and Made by Arabs’: The Gourmetization of Hummus in Israel and the Return of the Repressed Arab. American Ethnologist 38 (4):618.)